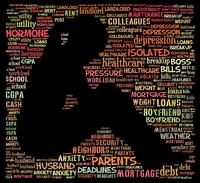 Every year since 2007, the American Psychological Association (APA) has commissioned the Harris Poll to do a Stress in America Survey. This survey is intended to measure the impact of various stressors on those who are 18 years old and older (18+) and living in the U.S.A. Each stressor is measured on a 10-point Likert scale, where 1 is either "little or none" and 10 is "a great deal" of stress. Given the nature of the sampling, no estimates of the theoretical sampling error can be made, as is generally true for polls.

Average reported stress levels decreased between 2007 and 2012 with slight but non-significant upticks in 2013 and 2015. The August 2016 poll showed the lowest overall stress rating to date. However, psychologists were continuing to report to the APA that their clients were increasingly upset about the political situation associated with the 2016 presidential election. In late October 2017, the eleventh Stress in America Survey results showed the first statistically significant rise in stress (from 4.8 to 5.1 on the 10-point scale) since the first survey report in 2007.The average reported stress level for 2018 was 4.9 , which was slightly down from the previous year's average.

Mass shootings was not the only stress category that saw more worry. Stress related to climate change has increased since 2018 from 51% to 56% in 2019. Concern about sexual harassment grew from 39% in 2018 to 45% in 2019. In the months leading up to the 2016 presidential election, 52% of Americans identified it as a stressor. More recently, 56% did so concerning the upcoming 2020 election.

In 2019, almost as many adults (69%) were as stressed about about heath care as about mass shootings (71%). To break down further their health care concerns, it was reported that of those who were at least sometimes concerned about health care, 71% had private insurance, while 53% had public health insurance.